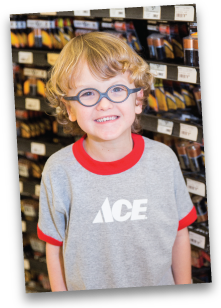 Parker was born on September 9, 2008, with hydrocephalus, or excess fluid on the brain. Parker's parents received the diagnosis at 20 weeks in the pregnancy that there was a blockage between the third and fourth ventricles of Parker's brain, which was preventing the cerebrospinal fluid from draining into the body. As a result, the fluid would build up and compress Parker's brain matter against his skull, making it almost non-existent, threatening to severely hinder Parker's early neurological development. At birth, the average baby has 90-95% brain matter and 5-10% fluid within the cranial cavity; Parker had over 98% fluid and less than 2% brain matter, amounting to a mere 8 millimeters of brain matter at birth.

At two days old, a shunt was placed in Parker's brain, allowing the fluid to drain, releasing the pressure on the brain, allowing the brain matter to expand and develop. Over the next several months, Parker underwent a series of shunt revision and craniofacial surgeries to ensure the proper draining of the excess fluid and to reshape his skull, in order to make room for his brain to hopefully grow to appropriate size and develop properly. Parker began therapy at four weeks old and continues to undergo both physical and occupational therapy to-date. Based on positive annual CT scans (which he calls his "brain scans"), Parker has remained surgery-free since June 6, 2009. He attends a special-needs kindergarten class, where he continues to thrive and demonstrate an inexplicable intellect and remarkable social skills.

Parker is truly a miracle - the child who once was thought may never walk or talk now plays, dances, sings, never stops talking (having never met a stranger) and hopes to one day become a sportscaster. Parker has far exceeded every expectation of his doctors, and now adds being named the 2015 Ace All-Star to his long list of remarkable achievements.

The Ace Foundation, through the generosity of P&G and Duracell, made a $10,000 donation to Children's Healthcare of Atlanta in Parker's name when he was crowned the 2015 Ace All-Star on January 8, 2015.