A Man And His Dog 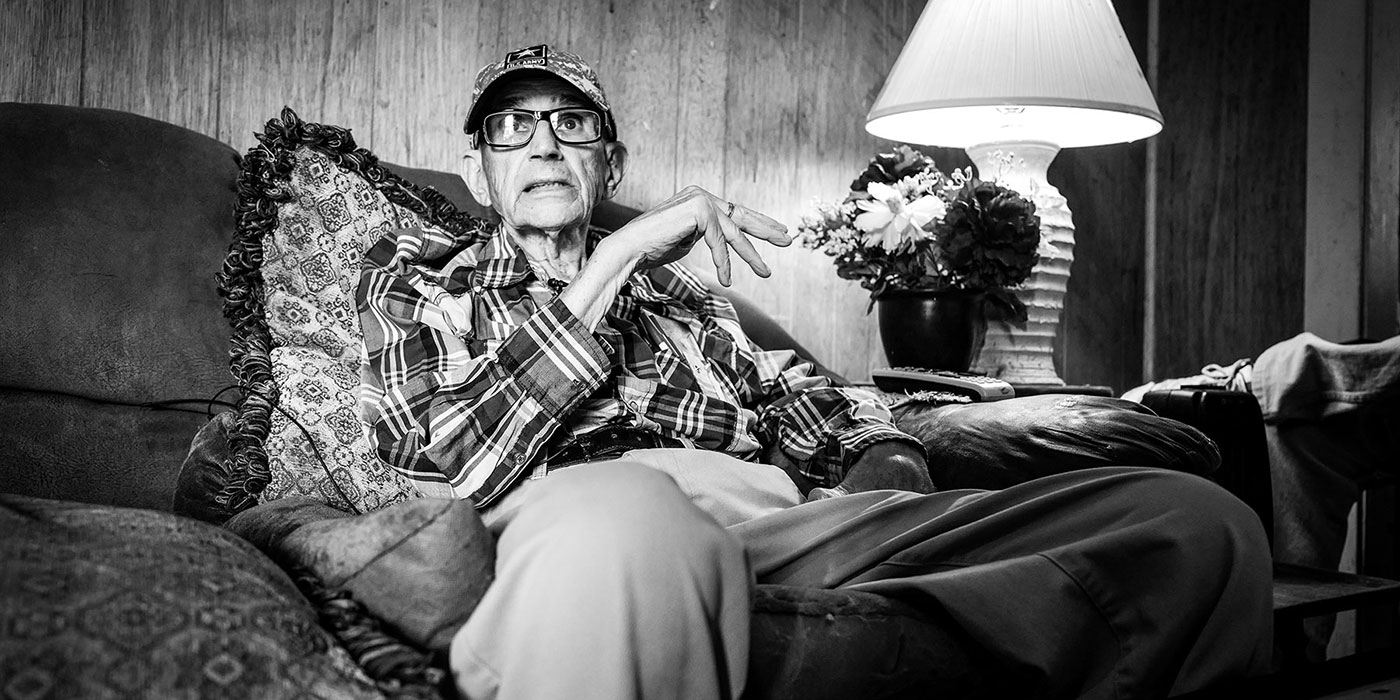 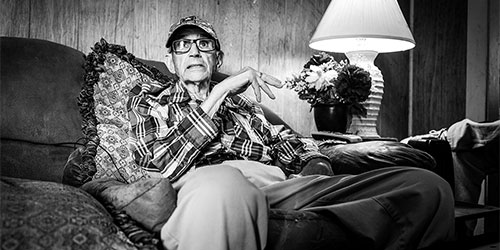 When a distraught elderly man walked into Cleveland’s Ace Hardware in Mississippi, one young store team member immediately reached out to help. Through conversations, which reminded the young man of talking with his grandfather, he learned what was going on in the old man’s life. He knew exactly how to help.

Summer in the Mississippi Delta gets unbearably hot and humid. It’s rough on anyone, but for the old and infirmed, it can be brutal. On one typically hot day in the summer of 2018, an elderly man walked through the front door of Cleveland’s Ace Hardware looking out of sorts: he appeared disheveled, over heated and confused. The store’s office manager, seeing the man, radioed to one of her young team members who she knew would handle this situation delicately.

When Sam heard the request to help an elderly man, he calmly but assuredly walked over to the man and simply asked, as he does with every customer, "How can I help you?" The man, Milton, wanted to buy a new shovel. His shovel wasn’t strong enough for the job he needed to do. Sam, wondering what sort of heavy lifting this elderly, frail man could possibly be doing, dug in deeper and asked more questions.

Let me help you
The pair took a walk to the back of the store and during their stroll, Milton revealed his beloved 15-year-old German Shepherd, Boe, died earlier that day and he wanted to bury him. The ground, due to the heat and lack of rain, dried out and proved difficult to penetrate for anyone, let alone this frail 83-year-old Army veteran who was also battling cancer. Sam, having deep respect for the elderly after having been raised, in part, by his grandparents, knew he wanted and needed to assist Milton. "I’m going to help bury your dog," he said. "I’ll meet you at your home after work and we’ll get it done."

It is just the right thing to do. Help if your help is needed, that always pays back to you later in. life.
- Sam, Store associate, Cleveland Ace Hardware 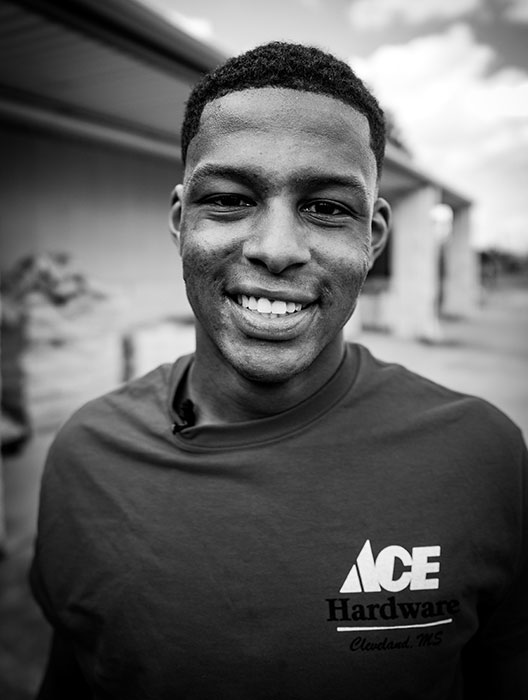 So, after his shift ended, this kind, hardworking college student lived up to his word and met Milton at his rural home, a few miles from the store amidst wide open fields. It was still hot and humid as Sam asked Milton to bring him to the dog, who had died inside his doghouse in the fenced-in backyard. Sam, with the help of a friend, dug a hole and, after wrapping Boe inside a blanket so Milton wouldn’t have to see his beloved pet in his deceased state, moved the German Shepherd into the hole and covered him with dirt. Milton wept as he bid farewell to his loyal companion and thanked Sam for the help. He offered to pay him for his hard work, but Sam refused. All he wanted, he said, was to take a selfie together.

Going viral
Later that day, Sam sent the photo his friend and Ace co-worker, Marisol who then posted it to social media. It started getting some likes, comments and shares, but then really took off. Soon enough, the photo had been shared thousands of times and the media caught wind of this story of kindness and reached out to do interviews with Sam and other Cleveland’s Ace team members. It played right into the heart of what this store means to and does for the community: They’re always there to help, no matter the situation.

Sam, being modest and humble, didn’t tell anyone what he did, not even his own mother, Cathy, who heard about it from a friend. When she asked Sam about it, he just calmly told her what he did, as if it was no big deal.

You see, this is how Cathy, an educator, raised her three children, including Sam’s older brother and younger sister. When talking to his mom about raising her kids, especially in the South in our country’s current climate, she drilled it into her sons’ heads they were born with two strikes: one for being men and two for being black men. This lesson and constant reminder drives both of her boys to always do good, do the right thing and to keep other’s interests at heart. This is how Sam acted when he met Milton. 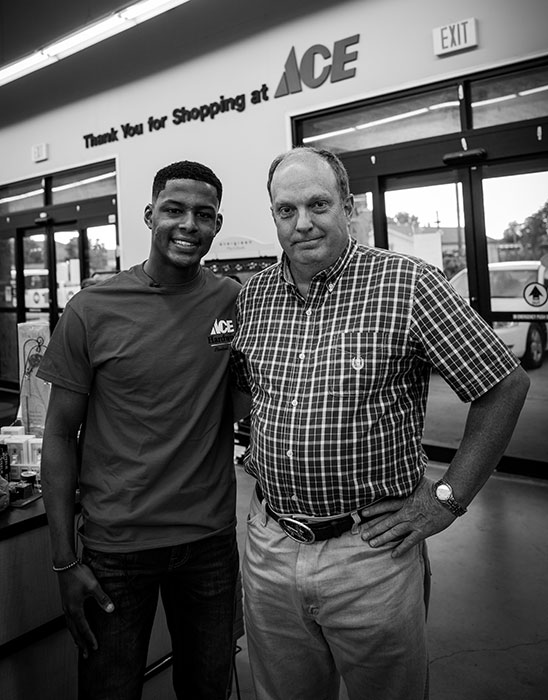 Milton’s son makes a surprise visit
While at home on break from his end-of-year finals at college, Sam picked up some hours at Cleveland’s Ace. While working the register one day, a middle-aged man walked up to make a purchase. He quietly approached the register and handed his product to Sam, who looked up and asked, as he always does, "How can I help you?" Steven then looked at him, asked if his name was Sam and introduced himself. Momentarily taken aback, Sam was surprised to meet the son of the man he helped a year earlier. "I’ve wanted to meet you to say thank you for helping my dad," Steve Lowe said. With that, the two chatted, Sam learned that Milton, while still in treatment for cancer, is doing fairly well. Before Steve left the store, Sam came from around the counter to give him a hug and thank him for coming in to see him.

These days, Sam, who is an aspiring media mogul (he has said he wants to create the world’s best media agency), takes his camera and iPhone everyone to record daily happenings to post to social media and his website. He will enter his third year in college and continue to put others ahead of himself and put love and kindness out into the world. It’s just how he was raised and is a great lesson for all of us.

A Man And His Dog